Yesterday we visited Varsana, the eternal residence of Srimati Radharani. As we explored that transcendental abode we were greeted warmly by all the residents who made us feel welcome and very much at home.

Yesterday I took a group of devotees on a 2 hour walk past fields of mustard flowers to Ram Taal, one of the oldest archaeological and heritage sites in Vrindavan. It was discovered by the Braj Foundation in 2005 and renovation work began in 2011. It is now a beautiful park and gardens. Sastra says it was one of the hermitage sites of the ancient sage, Saubari Muni. Archaeologists date the brick structures lining the kunda ( lake ) to be over 3,000 years old. During excavations copper plates with Sanskrit writings on them were discovered covering the bottom of the kunda. An ancient banyan tree stands majestically at the front of the property. As we walked around the nicely kept gardens I was thinking how wonderful it would be if all of Vrindavan was preserved like Ram Taal.

Today I took a few visiting devotees on the ultimate parikrama to Radha Kunda, Syama Kunda and Giri-Govardhan. It’s amazing how such parikramas, although performed hundreds or even thousands of times, are always new and fresh.

Vrindavan is enjoying unseasonably warm temperatures this December. Taking advantage of the pleasant atmosphere the residents of the dhama are out and about, going through their daily affairs without the discomfort of the usual cold weather. Krsna is so kind!

Please watch, and share, this video about Reconnection and request everyone to help out and donate. Thanks! Visit: “http://five.pictures/reconnection”

It was the first time I had ever missed chanting 16 rounds. I had completed 14 and was so tired I rationalized that it was better to take rest and make them up the next day, as we had been told we could do.

When I went into Srila Prabhupada’s room early the next morning, the first thing His Divine Grace said to me was, “So, are you chanting all your rounds?” As always, he knew everything without requiring any outside information.

I told Him about missing two rounds the previous day, and that I was going to make them up that day.

“When you are regularly chanting 16 rounds, it is like a young child learning to walk with the help of the mother. Because the mother is holding the child’s hand, when the child starts to fall, the mother holds them up and they don’t actually fall. It is the same with chanting.

“If you are completing 16 rounds and start to fall down, Krishna will hold you up and not allow that to happen.”

Then with His eyes open very wide and a transcendental move of his hand back and forth in front of his face, His Divine Grace said:

“However, if you are not chanting at least 16 rounds every day, your whereabouts are unknown, and you will definitely fall down.”

December 20, 2016: Reconnection – Help
Dear devotees: donating to help Govinda Maharaja promote his amazing film “Reconnection” is one of the best acts of charity you can perform during this holiday season. This film will go on to touch the hearts of hundreds of thousands of souls and help bring them to the lotus feet of the Lord. 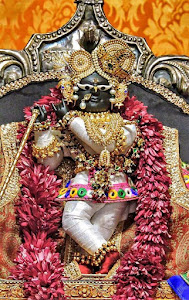 Thirty years ago, while reflecting on my duties as a young servant, I wrote the following offering to my spiritual master, Srila Prabhupada. Now in the twilight of my years, it remains my favorite prayer.

This year, in wake of a disaster that claimed a friend
And brought the walls crumbling down,
I took up my staff and looked to the road,
Hoping to find you again.

To gain your favor I gave up all that I owned
And tried to renounce my pride,
And ever more cautious of women and fame,
I traveled far and wide.

Moving once in the north and twice in the south
And east and west in turn,
I learned firsthand of God’s creation
And your kind mercy as well.

Soon austerity came, claiming all of my wealth,
But remained a welcome friend,
And strength I gained, and detachment too,
While traveling through foreign lands.

With no place to live, or a home of my own,
I learned to take shelter in you,
And the constant vision of birth and death
Kept me learned and true to my vows.

In forests and cities, villages and towns,
Repeating your words I roamed,
Witnessing your mercy, as kind as you are,
In delivering the fallen and poor.

Disease came in summer and near death in the fall,
In a jungle far to the south.
But your saving grace and Nrsimha’s mace
Kept me safe and protected through all.

Oh, how happy I am to serve you like this,
Always preaching and traveling on!
As a flowing river remains always clean,
I pray to remain always pure.

In happiness and distress, in heat and cold
I want to keep fighting on,
Delivering your message, as you asked me to,
While I’m enthusiastic, youthful, and strong.

But Prabhupada, the road is long,
And there are many dangers in between
Where I pause now . . .
And you rest safely on the other shore.

So on this day, so full of grace,
Please hear my fervent prayer:
Within my heart, beyond what’s dark
There’s a shining love for you.

So guide me right, keep me in the fight,
And away from maya’s glare,
And when all is done, and the battle’s won,
Take me home to be with you again!

“I am overjoyed to hear that your enthusiasm for chanting is increasing. As our contaminations are removed by chanting, the Lord’s form, qualities, and pastimes will be revealed to us in the holy name. There is no point in making a separate effort to artificially remember the Lord’s form, qualities, and pastimes. The Lord and His name are one and the same. This will be understood clearly when the coverings in your heart are removed. By chanting without offenses you will personally realize that all perfections come from the holy name.”

On our final day in Sri Rangam we visited many historic sites, culminating in a special darsan of the famous Rangunath deity. We also took darsan of Jagannatha deities said to be carved and installed in Sri Rangam by Lord Caitanya Mahaprabhu himself. Though our visit to Sri Rangam was short, our hearts were completely satisfied.

“All those places where my Lord Gaura Sundara traveled for pastimes I will visit in the company of loving devotees.” [ From Saranagati, by Srila Bhaktivinode Thakur ]

When Sri Rangam was invaded by Muslim conquerors in the early 13th century almost the entire Vaisnava population was exterminated. Only 750 devotees managed to escape and create a small village some distance from Sri Rangam. There they established a beautiful deity looking much like their beloved Rangunath, who was hidden during the Muslim invasion. Through the centuries the village and it’s temple fell into disrepair until a few years ago, when Murali Bhattar, a priest in the Sri Rangam temple, renovated the temple and began the worship of the deity again. Today we visited that small village. The deity was gorgeous. On the way back to Sri Rangam we stopped by another important temple. Vedic culture is still prominent in South India.

But oh if you could see
The change you’ve made in me
That the angels in the skies
Were envious and surprised
That anyone as nice as you
Would chance with me. 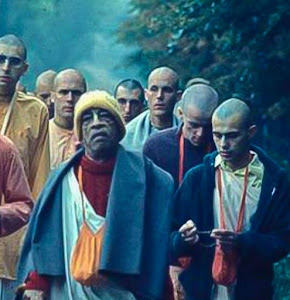 I am spending extra time after the month of Kartika here in Sri Vrindavan Dhama. Perhaps I may even stay through the winter. It’s a Vrindavan I’ve never known; so quiet and peaceful. It the perfect atmosphere for going deeper into hearing and chanting. Yesterday on an evening stroll down by the Yamuna I remembered one of my favorite verses by a devotee named Sri Raghupati Upadhyaya. It’s a far cry from my present stage of Krsna consciousness, but something we can certainly all aspire for:

“Here our Lord herded the calves, and here He played the flute. I pray that I may pass my days shedding tears as I speak these words on the Yamuna’s shore.”

“One should begin the worship of the deva Ganapati (Ganesa), who drives away all impediments in the execution of devotional service. In the Brahma-samhita it is stated that Ganapati worships the lotus feet of Lord Nrsimhadeva and in that way has become auspicious for the devotees in clearing out all impediments. Therefore, all devotees should worship Ganapati.” [ Srila A.C.Bhaktivedanta Swami Prabhupada, Nectar of Devotion, Chapter 8 – Offenses to be avoided ]