This morning we again visited the deity of Udupi Krsna. Udupi Krsna was carved 5,000 years ago by Visvakarma for Queen Rukmini to mitigate her feelings of separation whenever Lord Krsna left Dwarka.

The deity was later discovered by Sripad Madhvacarya and installed by him in Udupi. Our Gaudiya Vaisnava Sampradaya is connected to Madhvacarya. Therefore we are called the Brahma Madhva Gaudiya Vaisnava Sampradaya. The present day representative of the Madhava sect is Sri Pejawar Swami. He is 84 years old and very favorable towards ISKCON. He took sannyasa when he was eight years old and has been involved in the worship of Udupi Krsna ever since.

When we entered the temple this morning we heard a loud kirtan from behind us; it was accompanied by bugles, horns, drums and other musical instruments. A group of brahmins appeared and ordered all the pilgrims to move to the side. Then Sri Pejawar Swami emerged, surrounded by his senior disciples. Walking slightly stooped over, he passed the roaring kirtan party and, with his followers close behind him, made his way through a labyrinth of small pathways to a room not far from the main altar. Eager to join in, I followed the procession but was barred from entering the room by a stout brahmin.

“Then just let me watch from here,” I pleaded.

“Alright,” he relented. He stepped back from the doorway so that I could see inside.

Sri Pejawar Swami sat down on a small ornate silver throne and distributed maha prasadam to his disciples and to the temple priests and other brahmins. Ten minutes later he began chanting mantras and then took up an ornate silver pot and poured the caranamrta of Udupi Krsna into the hands of all those present. Eager for mercy, I tried to jostle my way through the doorway, but was stopped again by the brahmin.

“Sri Pejawar Swami is a highly advanced devotee,” I thought. “I have to get some mercy!”

“He’s almost finished,” the brahmin guard said over his shoulder to me. “You can see him as he comes out. He’ll be coming in a…”

Before he could finish, I squeezed my way past him and to the front of the room. Coming before Sri Pejawar Swami I extended my hand.

“Your holiness, mercy please!” I said, glancing back at the brahmin. I saw that everyone in the room was staring at me. Pejawar Swami smiled and lovingly poured some of the carnamrita from the silver pot into my hand. Then he raised his right hand in the form of a blessing. I stepped back respectfully to allow him to pass, and, nodding affectionately, he paused and raised his hand to bless me a second time.

As he and his contingent departed, I walked out the door, feeling purified and uplifted. I remembered a verse from Srimad Bhagavatam where Narada Muni appreciates the mercy of the Vaisnava saints who had passed his way.

“Once only, by their permission, I took the remnants of their food, and by so doing all my sins were at once eradicated. Thus being engaged, I became purified in heart, and at that time the very nature of the transcendentalist became attractive to me.” [SB 1.5.25 ] 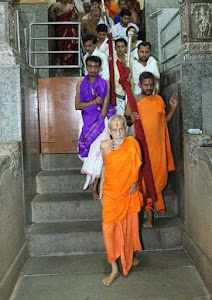