Nathdwara is a town in India’s western state of Rajasthan. It is located in the Aravalli hills, on the banks of the Banas River in Rajsamand District. It is most famous as the home of the Sri Nathji deity. Sri Nathji was discovered at Govardhan Hill in Vrindavan by Sri Madhavendra Puri. He is dearly loved by devotees all over the world. New Years Eve was like any other day in Nathdwara — everyone was rushing to the temple to Sri Nathji. We also rushed to see the Lord and prayed for His blessings in the coming year! 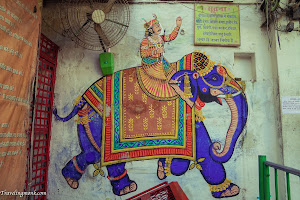 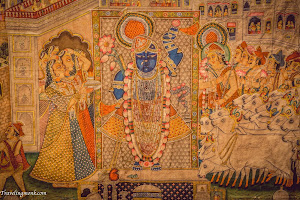 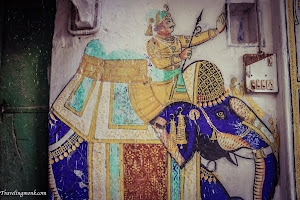 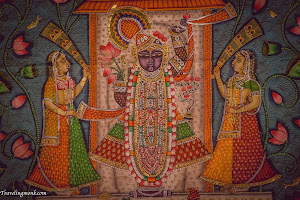 On our way back from Nathdwara to Vrindavan we stopped in Jaipur and visited several famous temples, including Radha Govinda and Radha Gopinath. We were deeply touched by the citizens love for their deities. Their portraits herein are evidence of their devotion. 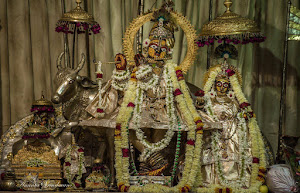 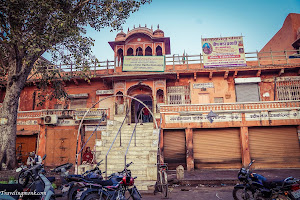 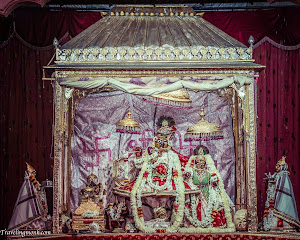 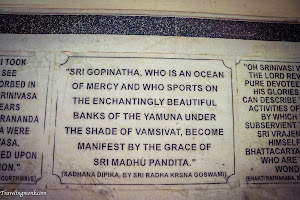 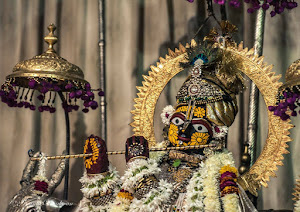 Dear disciples: Each and every morning before I begin my japa, I chant the following verses ( as a prayer ) from the 8th chapter of Harinama Cintamani, by Srila Bhaktivinode Thakur. It helps me to appreciate my good fortune in being initiated into the chanting of the holy names of Lord Krishna. I recommend you do the same. 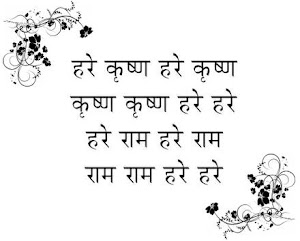 “When I was alone in your New York, I was thinking, who will listen to me in this horrible sinful place? All right, I shall stay a little longer, at least I can distribute a few of my books, that is something. But Krishna was all along preparing something I could not see. Now I can see it was a miracle. Otherwise, your city of New York, one single old man, with only a few books to sell for barely gaining eatables, how he can survive, what to speak of introducing God consciousness movement for saving human kind. This is Krishna’s miracle. Now I can see it.” [ Letter to Sudama, December 23, 1972 ] 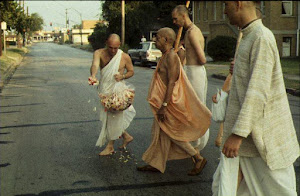 A Year In Review

For the pleasure of Srila Prabhupada we present a review of our service for the year 2016. All glories to the many devotees who spread these wonders of Krsna consciousness all over the world!

A Year In Review

A Year In ReviewFor the pleasure of Srila Prabhupada we present a review of our service for the year 2016. All glories to the many devotees who spread these wonders of Krsna consciousness all over the world!

Bandi-Anandi is a small village near Gokula in Sri Vrindavan Dhama. At the end of the village is a beautiful temple of Yogamaya devi, who is worshipped in two forms as Bandi-devi and Anandi-devi. When Krsna appeared in Kamsa’s jailhouse, His potency that caused the jail to be unlocked and Vasudeva’s shackles to fall was Bandi-devi. Anandi-devi put all the guards to sleep. By her potency, Vasudeva was able to carry baby Krsna to Gokula without being detected. After taking darshan of these two forms of Yogamaya we walked around the village. Our presence created quite a sensation as everyone came out to see us and greet us as well. The inhabitants of Bandi-Anandi are very special people. To really understand Vrindavan one must visit the more remote villages and associate with the wonderful Vraja-vasis who live there! 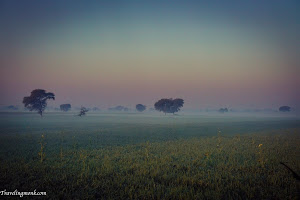 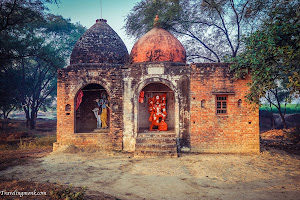 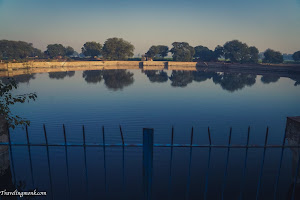 The village of Dauji is a one hour drive from the town of Vrindavan. In Dauji everyone and everything revolve around the local temple where a famous Deity of Lord Balarama resides. Dauji is another name for Balarama meaning ‘older brother.’ After taking an amazing darshan we wandered around the village visiting various sites and meeting with the local people. The village so much reminded me of the town of Vrindavan 30 years ago. Everything was very simple. People were in love with the deity of Dauji. The temple was a bustle of transcendental activity. A most wonderful experience. I will return! 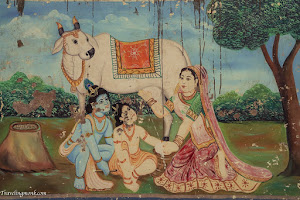 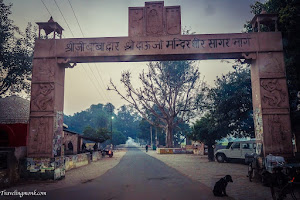 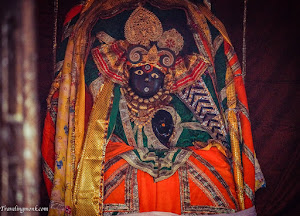 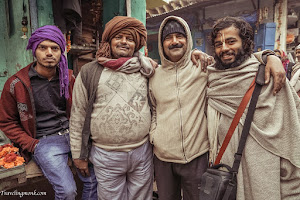 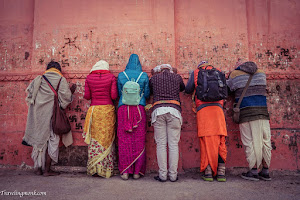 I am in Durban, South Africa for 9 days to meet city officials about a proposed festival for next September. It’s still in the pioneer stages but looks like it could be a major event. Today I met with Mr. Thembinkosi Ngcobo who is in charge of Durban’s departments of sport, recreation and culture. I also did a yearly medical exam today that came out well. But the doctors are a little concerned about my prostrate gland and so I’ll do a prostate biopsy tomorrow. Simple procedure that I’m hoping will come out well. Keep me in your prayers everybody! 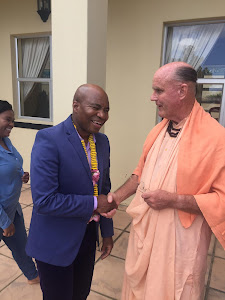 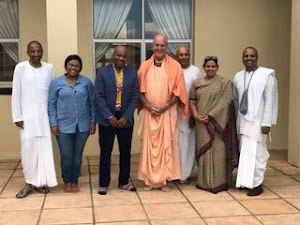 January 21,2017
Dear devotees,
Three days after his prostate biopsy HH Indradyumna Swami has come down with a serious bacterial infection. We have admitted him into a hospital in Durban and he is being administered intravenous antibiotics. The doctors have advised that he stay for about three days.

Once again, Maharaj apologizes for any inconvenience and requests for all your prayers and well wishes. We will keep you updated. 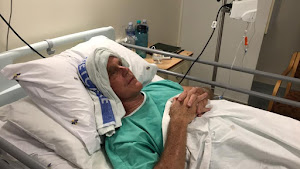 Dear disciples, friends and well-wishers: An update on my condition. Unfortunately, the bacterium infection which I contracted from my prostate biopsy has developed into Septicemia, a serious and dangerous blood infection. I am in a good hospital here in South Africa with the best doctors and they are administering strong antibiotics. Once again I am humbly appealing for your prayers that I may quickly recover and continue with my services to Srila Prabhupada.

Please accept my obeisances. All glories to Srila Prabhupada!

HH Indradyumna Swami’s condition is very stable now. The course of antibiotics, to which his body has responded well, will conclude on Thursday afternoon. Then he will be discharged from hospital and will spend time recuperating in Durban.

Maharaj is in good consciousness and focused on continuing his important services to Srila Prabhupada. He is very appreciative of all the loving prayers devotes have offered for his well-being. Please continue to do so. 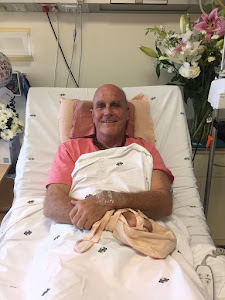 Yesterday I was released from the hospital here in Durban. I am back to my normal activities. Before I left the doctors told me I had a very close call. I am grateful for their care and attention, but I know the greatest factor that saved my life was the loving prayers of so many devotees throughout the world. I want to thank each and every one of you.

This morning I received a call from a friend of mine, a Muslim cleric in Palestine. We met in 2009 at the Parliament of World Religions in Melbourne, Australia. He called to say that having read many of your comments on Facebook he was very much impressed with our ISKCON movement and the genuine spiritual love exchanged between it’s members. He then quoted a famous Sufi saint, al-Suhrawardi:

“If words come out of the heart, they will enter the heart, but if they come from the tongue, they will not pass beyond the ears.”

Your heartfelt prayers have given me a new lease on life and I want to redouble my efforts in helping Srila Prabhupada spread Krsna consciousness all over the world. Wiser now to the sufferings of material existence I pray my words will help others take up the only alternative; the blissful life of Krsna consciousness.

On February 24 I will have surgery for my stage 1 prostate cancer. The doctors are very optimistic about the outcome. Please do remember me again on that day.

Once again, from my heart to all of yours: Thank you!

After his discharge from hospital, doctors advised Indradyumna Maharaj to get in some light exercise to regain strength and overall fitness. This afternoon he walked on the scenic Durban Beach Promenade, and even ran a little! Shyam Bihari das captured some inspiring pictures and clips.

Bouncing Back!After his discharge from hospital, doctors advised Indradyumna Maharaj to get in some light exercise to regain strength and overall fitness. This afternoon he walked on the scenic Durban Beach Promenade, and even ran a little! Shyam Bihari das captured some inspiring pictures and clips.Hare Krishna.Your servant,Swarup Damodar Das

“Uttara said: O Lord of lords, Lord of the universe! You are the greatest of mystics. Please protect me, protect me, for there is no one else who can save me from the clutches of death in this world of duality.” [ Srimad Bhagavatam 1.8.9 ] 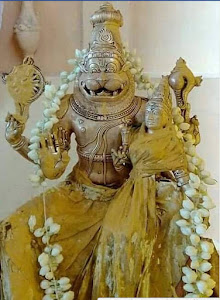 “Hundreds and thousands of living entities meet death at every moment, but a foolish living being nonetheless thinks himself deathless and does not prepare for death. This is the most amazing thing in this world.” [ Mahabharata, Vana-parva 313.116 ] 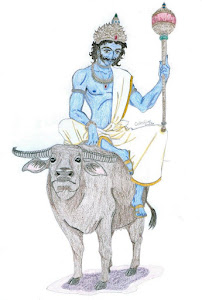 “Even one moment of life spent cannot be regained for millions of gold coins. Therefore, what greater loss is there than time spent uselessly?” [ Canakya Pandit ] 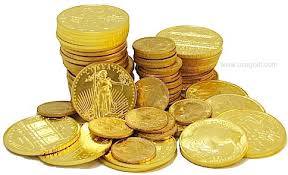 Yesterday I went out with devotees on a Food For Life program in a Zulu township near Durban here in South Africa. As we drove to the township Vrindavan Candra das, who heads up Food For Life in Durban, told me the township was one of the most notorious in the country.

“On average there are 10 murders each weekend.” he said. “The situation is so bad that the police rarely, if ever, enter the township.”

“And we’re going in there?” I asked a little surprised.

“Lord Caitanya is the deliverer of the most fallen,” he replied with a smile. “Plus I convinced 3 policeman to accompany us with AK-47’s,” he said. “They like what we do.”

As we entered the township we saw a big sign that read, “No whites!”

“Don’t worry.” Vrindavan Candra said looking over at me. “The people love us. And we love them. They are the poorest of the poor and down and out. We’re feeding them prasadam, giving them Srila Prabhupada’s books and having kirtan with them. They truly appreciate.”

Then he paused and said, “But do be careful.”

“Sounds good,” I said. “I’ll take some photos to show the devotees around the world what an amazing service you guys are doing down here.” 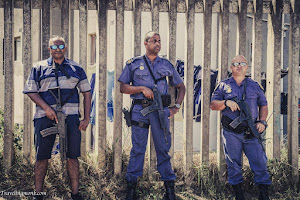 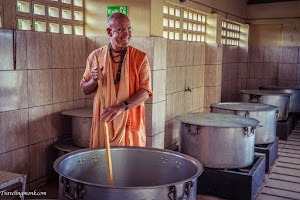 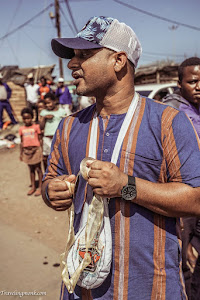 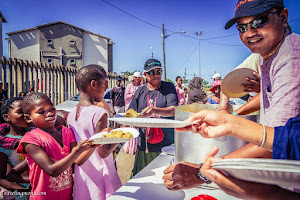