Yesterday our parikrama party visited ‘Care For Cows,’ a cow protection program started and maintained for many years in Vrindavan by my late godbrother, Kurma Rupa dasa. We walked on village roads for over an hour until we reached the large gosala. The first to greet us were the cows themselves! 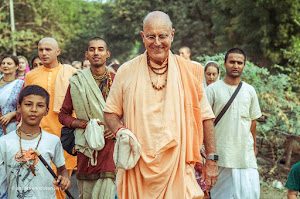 Every Gaudiya Vaisnava’s dream is to visit Varsana, the sacred home of Srimati Radharani, again and again. Our parikrama party was blessed the other day to circumambulate the entire area. A special treat was meeting the residents of Varsana as they went about their daily chores of tilling the fields and herding their cows. 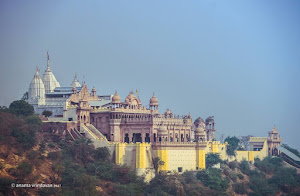 Here is an update on Agnideva prabhu:

On Wednesday neurologists were planning a spinal tap to check for the dreadful Gullian Barr’e Syndrome. But on Thursday Agnideva prabhu was able to move his hands and lower limbs as well. This recovery in mobility is not symptomatic of GBS, so they continued trying to improve his breathing. He was achieving good oxygen levels and by Friday very minimal oxygen was being administered. At that point, Agnideva prabhu was able to speak and recognized everyone. He also remembered everything; the kirtans, japa, reading etc. at his bedside from the past few days, even while he was heavily sedated at the time. Yesterday the doctors got him to sit in a chair for two hours, but it was very exhausting for him. Although he is improving with reflexes, it’s very slow and his condition remains as serious.

Although his Oxygen levels are better, fluid continues to accumulate in his lungs, requiring drainage. Daily X-rays show slight improvement each day, but a CT scan of the chest is now scheduled to help respiratory specialists see what is causing the fluid and the lung collapse. Depending on the results, they may have to operate and insert a special liquid that draws the lungs towards the rib cage helping them inflate normally. Afterwards, surgery will also be required to repair the holes in his lungs made for drainage.

Agnideva prabhu is in a positive state of mind. He requested to hear his recording of Srila Prabhupda’s poem, “Krishna tabe puniya habe bhai.” He also announced that he has decided that his next recording will be dedicated to Lord Caitanya.

We did not anticipate the complexity of his condition, his long stay in intensive care, the probable surgery of the lungs, and thereafter his heart and the rehabilitation program. Agnideva prabhu, as well as his family and his friends, are overwhelmed by the loving support received. As the path of treatment becomes clearer we may need to call for further continued assistance from you all. Thank you everyone.

Jaipur, know as the Pink City, is rich in the culture and history of India. For our parikrama group the outstanding features were the deities of Radha Govinda, Radha Damodar, Radha Gopinath and Radha Vinode, all of whom are central to our Gaudiya Vaisnava tradition.

Jaipur, know as the Pink City, is rich in the culture and history of India. For our parikrama group the outstanding features were the deities of Radha Govinda, Radha Damodar, Radha Gopinath and Radha Vinode, all of whom are central to our Gaudiya Vaisnava tradition.

Please accept my humble obeisances. All glories to you!

As always, this is a day of mixed emotions for me. On the one hand, there is the pain of separation. Although you departed from our material vision 40 years ago, it seems to me as if it was only yesterday. In material relationships, the grief one feels when a loved one leaves this world is often mitigated with the passing of time. But in transcendental relationships, the pain in one’s heart only increases with each day. The famous author George Eliot, wrote:

“Only in the agony of parting do we look into the depths of love.”

But as well as being a day of sadness, this day is also one of celebration because we know that you are with your beloved Lord, far from the miseries of this world of birth and death.

Or, are you? Knowing your deep compassion and love for the fallen conditioned souls I sometimes wonder. In 1975 in Paris, my godbrother Adi Shekar dasa asked you in an innocent way, “Srila Prabhupada, where will you go after you die?”

You closed your eyes for a moment and then replied softly, “I plan to go to the hellish planets to continue preaching the message of Sri Caitanya Mahaprabhu.”

You spoke with such unparalleled conviction that for me you became the personification of the following verse:

“Devotees solely engaged in the devotional service of the Supreme Personality of Godhead, Narayana, never fear any condition of life. For them the heavenly planets, liberation and the hellish planets are all the same, for such devotees are interested only in the service of the Lord.”

Srila Prabhupada, if Krsna fulfilled your desire to preach to the fallen souls of the hellish worlds, then please know that I am ready to join you at any time. My greatest and only pleasure in life is assisting you in your preaching mission in this world.

Sometimes people ask me, “Swami, where do you live? Where is your home?”

I always reply, “My home is wherever I am preaching on any given day, for home is where the heart is, and my heart is one with my master’s desire to spread the holy names far and wide.”

Srila Prabhupada, I am in the twilight of my life and thus my desire to rejoin you may come at any time. I am peaceful with this prospect and will leave this world with no regrets. Nevertheless, there remains a concern within my heart, and that is for the welfare of the younger generations of devotees that will be left behind to carry on your mission.

I have seen many a sincere soul in the ranks of the men and women who have taken shelter of your lotus feet either by birth or good fortune. Please bless them with your mercy so that they can continue to carry the torch of knowledge that illuminated the path of pure devotional service for my generation. Please give them a taste for the chanting of the holy names, the taste that carried many of my godbrothers and godsisters safely over the ocean of material existence to that place from which one never returns. Please grant them a sense of compassion for all the conditioned souls suffering in the ocean of material existence. May you grant them the wisdom to avoid the errors of my generation and the courage to face the fierce opposition that will most certainly come with the advancement of this age of Kali. And please give them the sense of loyalty to your movement which was the hallmark of many of the great souls of my generation, both those who were prominent within the movement and those who quietly dedicated their lives to Krsna consciousness.

I offer my respects to all of them and to all vaisnavas who are by nature the true well-wishers of all humanity.

All glories to you Srila Prabhupada, my eternal well wisher!

Your servant in heaven or hell,
Indradyumna Swami 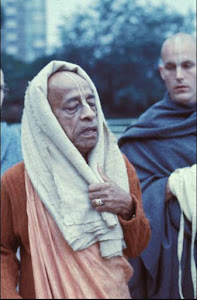 Another one of Ananta Vrindavan’s amazing photos. This one is an unprecedented view of Ter Kadamba in Vrindavan. Ter Kadamba was the site of Nanda Maharaja’s gosala and also one of the places where Srila Rupa Goswami performed bhajan 500 years ago. It was there that he wrote Upadesamrita, The Nectar of Instruction. 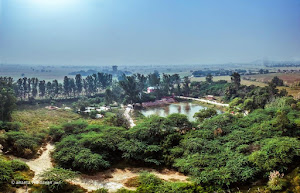 Vrinda Kund is the eternal abode of Vrindadevi, Krsna’s Lila potency. Early every morning she, Purnamasi and Nandimukhi meet at this kund to arrange Radha and Krsna’s pastimes. By Her grace, we were fortunate to spend the day there with our parikrama party to hear and chant her glories and beg for her divine mercy.

Vrinda Kund is the eternal abode of Vrindadevi, Krsna’s Lila potency. Early every morning she, Purnamasi and Nandimukhi meet at this kund to arrange Radha and Krsna’s pastimes. By Her grace, we were fortunate to spend the day there with our parikrama party to hear and chant her glories and beg for her divine mercy. Vṛnde! Namas Te Caraṇāravindam!

The following is an update on Agnideva prabhu’s condition. He is still in ICU in the hospital in Sydney, Australia and will be there for sometime. The doctors say that is he is in serious, but stable, condition. He remains on a ventilator, as he is unable to breath on his own. He is sedated because of the discomfort caused by a breathing tube. One drain has been removed from his collapsed lung, but another remains in place for drainage of liquid . The plan is allow his body to heal somewhat overnight and then do more tests . He is on strong antibiotics which are helping to bring down an still unknown infection in both lungs..

We very much appreciate the generous financial help coming from devotees and friends all over the world. ICU is costing $6000 per day. When he improves he will be moved to a ward costing between $3000 – $4000 per day. Further Rehab costs have not been estimated.

His son was chanting in his room this morning. When the nurses took off the machines to wash him his son said, “Dad if you know its me squeeze my hand” and Agnideva did.

We will be adding a Paypal link for donations in 2 days time.

Please spread the word to help us raise funds for this wonderful devotee.

Thanking everyone very much.

Dear devotees: Agnideva prabhu, Srila Prabhupada’s beloved disciple, and one of our movements most loved and favored kirtaneers, is gravely ill in a hospital in Sydney, Australia. There has been a slight improvement in his condition since last night. Please everyone pray sincerely that his condition will continue to improve. He is a veritable icon in ISKCON and we need to hear his sweet voice singing the holy names for many years to come.

Our annual Kartika parikrama in Sri Vrindavan dham has just begun! Join us this month with our video series, ‘Kartika 2017 Parikrama With Indradyumna Swami.”

Our annual Kartika parikrama in Sri Vrindavan dham has just begun! Join us this month with our video series, 'Kartika 2017 Parikrama With Indradyumna Swami."

Of all the sacred days in Sri Vrindavan dhama, the appearance day of Srimate Radharani is most dear to the local inhabitants. We were fortunate to be in Vrindavan on that day in August and visit both Raval and Varsana, the two places associated with Srimate Radharani’s appearance and pastimes. All glories to Srila Prabhupada, the revealer of the holy dhama!

The Most Sacred Day

Of all the sacred days in Sri Vrindavan dhama, the appearance day of Srimate Radharani is most dear to the local inhabitants. We were fortunate to be in Vrindavan on that day in August and visit both Raval and Varsana, the two places associated with Srimate Radharani's appearance and pastimes. All glories to Srila Prabhupada, the revealer of the holy dhama!