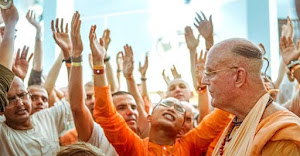 After successfully meeting several influential people at the Global Citizens event in Johannesburg, South Africa we traveled to Cape Town for a short break. There we visited famous Table Mountain which is listed by Unesco as a World Heritage Site and one of the new 7 Wonders of Nature. We ascended the massive mountain by cable car. On top of the mountain, overlooking the southernmost tip of Africa, I remembered Lord Krishna’s words in Bhagavad Gita: “Know that all beautiful, glorious and mighty creations spring from but a spark of My splendor.” [ BG 10.41 ] 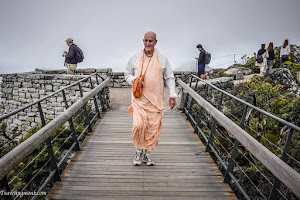 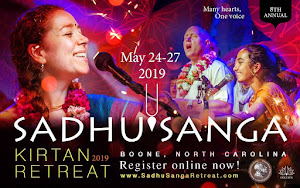 “I am so glad to hear that you would like if we could open one branch of our International Society for Krishna Consciousness there in Cape Town, South Africa. That would be very nice. So if you can arrange for our reception, we may go there immediately, and even I may go on my way back from India and establish one centre there [ in South Africa ]. Undoubtedly this movement is very sublime and anyone who takes to it becomes happy.” 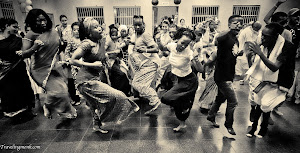 “With one glance of your enchanting eyes, you have stolen away all trace of me!”

[ Amir Khusro, a famous 14th century Sufi mystic, in a poem to his spiritual master in Vraja Bhasa language ] 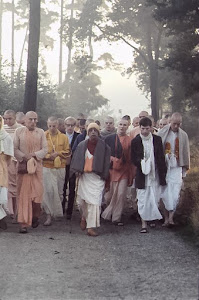 It’s summertime down here in Durban, South Africa, so this afternoon we went on harinama along the beachfront. What an experience it was! African people love to sing and dance. While watching them dance with us today I realized Caitanya’s formula truly works anywhere and everywhere in the world. All glories to Sri Krsna’s holy names! All glories to Srila Prabhupada! 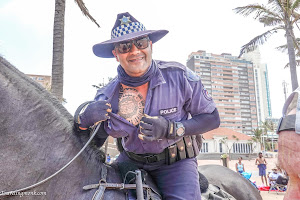 Today was a national holiday in South Africa officially called, “The Day of Reconciliation.” It is meant to help reconcile grievous misunderstandings that exist between different ethnic groups in the country. In a spirit of good will we took a harinama party to an outlying township near Durban where African people live well below the poverty line. We chanted Hare Krsna with them and danced in ecstasy altogether. We distributed healthy, nutritious food offered to Krsna. We gave out Srila Prabhupada’s books in Zulu. We spoke with the people and embraced them. We saw no differences between us and them, for we are all spirit souls, part of the greater family of God. Our journey into the township was not without risks. We saw one sign that read, “Whites Keep Out.” As a precaution, we were escorted everywhere by a well-armed police force. They were vigilant. But in the end, love reigned supreme and Krsna stole everyone’s heart. As we rode back home in our vehicles I was thinking, “Good Lord, I could do this every day of my life!” 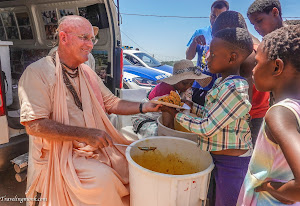 After almost two weeks in Africa I came back home to Vrindavan to spend a few days before moving on to China. Winter has set in and it’s cold here. But the Vrajavasis don’t seem to mind as they are always thinking of Krsna. I would also like to always remember the Lord and thus I constantly meditate on Sri Vrindavan dhama, His eternal abode and residence. 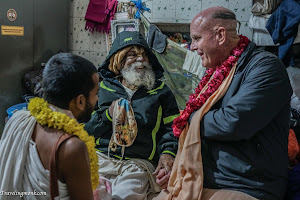 Yesterday, Pundrik Goswami of the Radha Raman Temple in Vrindavan asked me to accompany him to a lecture he was giving in Agra, not far from the famous Taj Mahal. The program, by invitation only, was attended by many of Agra’s most influential and distinguished citizens. The title of lecture was: Sri Caitanya Mahaprabhu. Goswami kindly had me speak to the audience for 20 minutes before his lecture. I explained the scriptural references to Lord Caitanya’s appearance as well as His introducing the Yuga Dharma of chanting the Hare Krsna mantra. I concluded by sharing with the audience how Srila Prabhupada took Lord Caitanya’s message to the west and how the chanting is now being heard throughout the entire world. I am grateful to Goswami for allowing me to address such an august assembly. 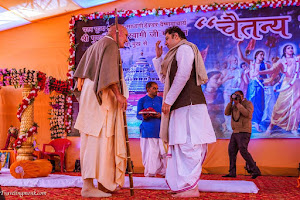 December 25, 2018: Album- Christmas In Beijing
Practically speaking there is no Christmas in China. The communist government does not encourage it. I saw one single Santa Claus while roaming around Beijing this morning – and that was a Santa Claus doll in a shop window. Nevertheless, I shared the spirit of the holiday season by holding two programs in different homes throughout the day where we discussed the philosophy of Krsna consciousness, had kirtan and wonderful prasadam. I really enjoyed the day. As Jesus said: “It’s better to give than it is to receive.” And what better gift is there to share on Christmas day than love of God? 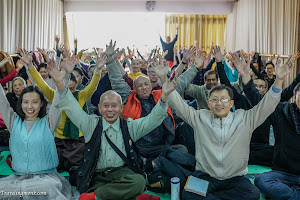 Today we took a bullet train from Beijing to Qufu, the village where Confucius was born 2,500 years ago. In Qufu there is a community of people who revere Confucius and his teachings. I visited them 2 years ago and they invited me back this year for a special gathering. This evening I spoke to 500 people on the similarity of the teachings of Confucius and Chanyaka Pandit of India. I concluded by saying that both teachings are meant to bring us to the mode of goodness, but beyond goodness is transcendence. And transcendence means going back Home to the spiritual world. I received a loud applause. It was all Srila Prabhupada’s mercy. Tomorrow I will speak in the evening on the nature of the soul. They have specifically asked for a long kirtan at the end. So happy to be on the road again! 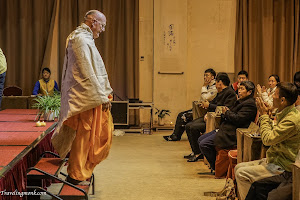 Shanghai is the 2nd largest city in the world and the most populated city in China with 24 million people. Religious movements are restricted to small gatherings now in China so throughout the day I met with several groups of devotees and guests. The discussions and soft kirtans satisfied the hearts of all! 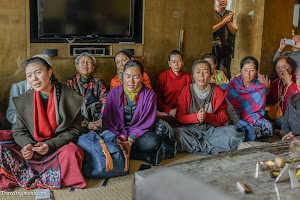 This afternoon on my last day in Shanghai we did a program in a popular yoga studio. Over two hundred mostly young people listened intently to the class and as always, chanted and danced ecstatically with us. I saw 6 people crying during the kirtan. In fact, I often see Chinese people cry during bhajans and kirtans. I can only conclude that Lord Caitanya and the holy names are showing special mercy to the people of the Khasa race as described in Srimad Bhagavatam:

”Kiratas, Hunas, Andhras, Pulindas, Pulkasas, Abhiras, Sumbhas, Yavanas and members of the Khasa [ Chinese ] races, and even others addicted to sinful acts, can be purified by taking shelter of the devotees of the Lord, due to His being the supreme power. I beg to offer my respectful obeisances unto Him.” 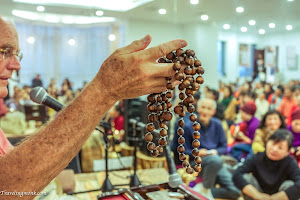