The annual Sacred Sounds Retreat at New Govardhan, Australia attracts devotees from all over the country. The unique and beautiful forested area around New Govardhan provides a perfect background setting for kirtans that go on for hours and hours. Aside from the morning program, the festival is focused wholly and solely on chanting the holy names with some of ISKCON’s most renowned kirtaneers. Everyone agreed this year’s festival was the best ever!

Following in the footsteps of Srila Prabhupada, who visited Japan 3 times, our traveling retinue spent an eventful 24 hours in Tokyo. We did a harinam and the local devotees organized a wonderful program for us in a community hall. Myself and Ananata Vrindavan dasa also had the opportunity to visit the 1,000 year-old Naritasan Shinshoje Temple just outside the city. The whole of Tokyo was full of it’s famous cherry trees in full bloom! 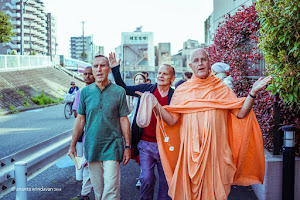 From the green-forested paradise of New Govardhan, Australia in late summer; to the blossoming cherry trees in Tokyo, Japan in spring; we now find ourselves in the freezing cold winter of Vladivostok, in far eastern Russia. But our hearts are warm with love for the local devotees who built an amazing temple just off the main port and who do harinam samkirtan 365 days a year without exception. All glories to these devotees carrying on Srila Prabhupada’s mission in this far-off corner of the world! 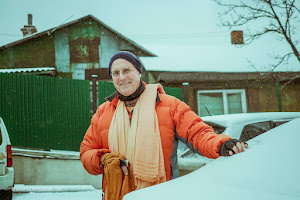 Five hundred years ago Lord Caitanya stated that His holy names would be heard in every town and village of the world. That being said, who could have ever imagined that such chanting and dancing would ever reach the frozen far eastern shores of modern day Russia, the largest country in the world? But here we are witnessing this historic phenomenon first hand ie: a beautiful ISKCON temple on the bay in Vladivostok, stunning deities, hundreds of devotees and numerous preaching programs going on simultaneously. All this has been made possible by Lord Caitanya’s foremost modern day representative, His Divine Grace Srila A.C. Bhaktivedanta Swami. May he be glorified throughout the 3 worlds! 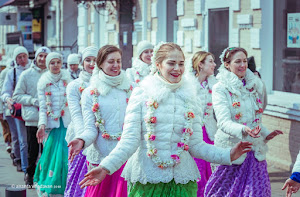 Following in the footsteps of our beloved spiritual master, Srila Prabhupada, we are back in Russia on a two-month winter preaching tour, taking us from the far eastern shores of Vladivostok to St. Petersburg, 6,532 kilometres to the west. The rigours and austerities involved in such a tour are nothing compared to the joy and satisfaction that come from sharing our good fortune as devotees of the Lord with others.

Dear disciples: A new lecture is available on www.narottam.com. ‘Don’t Jump Ship!’ given in Vladivostok, Russia last week contains valuable instructions how to remain steady on the path of pure devotional service. 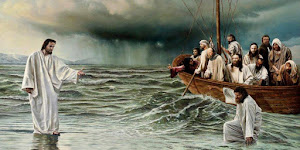 In Russia, in the Siberian tundra, winters are long and summers are short. During the winter temperatures are far below freezing and the ground is covered with thick snow and ice. In the midst of it all is a beautiful ISKCON temple, with equally beautiful devotees. 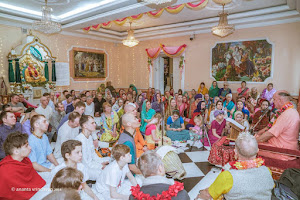 The Siberian devotees in Irkutsk push on our movement despite all odds – one being being extremely harsh weather. Their reward is the great joy they experience in chanting the holy names in each other’s association. 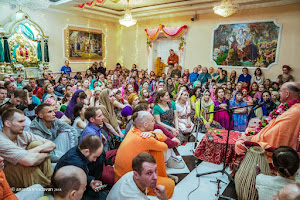 Dear disciples: A new class is available on www.narottam.com. “OH! HIS NAILS!” was given in Irkutsk, Russia on April 10. From sastra we learn of the last words of the asura Hiranyakasipu. 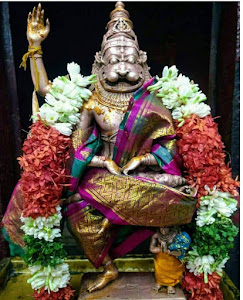 Our travels in the service of the Lord recently took us to the town of Irkutsk, deep in Siberia, Russia. There we discovered a wonderful yatra, complete with hundreds of devotees, a beautiful temple, gorgeous deities, a gurukula, a prasadam restaurant and weekly harinams. How pleased must Lord Caitanya be to see His movement flourishing in such far-off-distant places as Siberia!

Our plans for Kartik Parikrama 2018 have been finalized. For all the details of this year’s parikrama and popular pictures and videos of our previous parikramas, please click here: Kartikparikrama.com 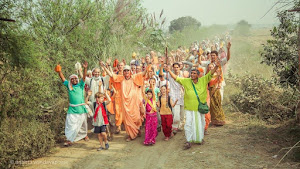 One thousand miles away from Irkutsk, across the frozen Siberian tundra, is Krasnoyarsk, the 3rd city on our Russian itinerary. Here we were greeted by a blissful group of devotees, who introduced us to yet another amazing temple in this far-distant and isolated part of God’s creation. How do they do it? They are faithful followers of Srila Prabhupada, who is blessing them with unlimited mercy. Unique to the congregation is a group of gypsies, old friends of mine, who love to chant and dance in kirtan. 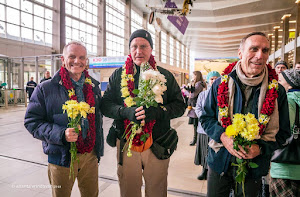 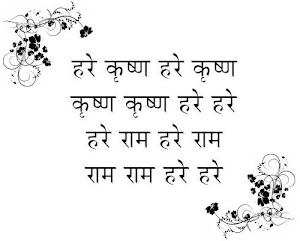 The third stop on our tour across the entire country of Russia was Krasnoyarsk, deep within the Siberian countryside. There we were greeted by a blissful group of devotees, who introduced us to yet another amazing temple in this far-distant and isolated part of God’s creation. Unique in the congregation of devotees was a group of gypsies, old friends of mine, who relished our visit as we chanted and danced together in great happiness. 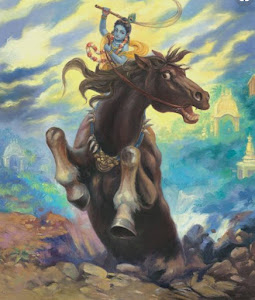 As we continue our journey through Russia at winter’s end we meet devotees everywhere. In the city of Novosibirsk, in Siberia, we chanted and danced with blissful devotees for hours on end in an old hall in the city. It was just like Vaikuntha! 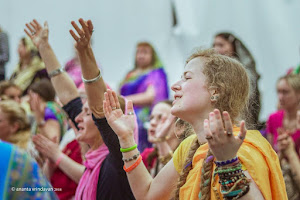 Dear disciples: A new lecture,”The Thief” given here in Russia, is now available on narottam.com. 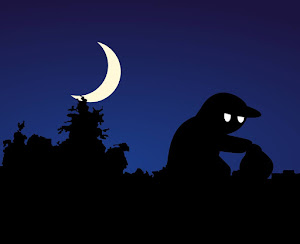 Our visit to Siberia has been magic. The sweet, enthusiastic, dedicated devotees – the blissful endless kirtans, the katha, the prasadam; everything! Even the biting cold and slogging through the snow could not deter us. We’ll miss this hidden, secret, remote part of the world. And if the Lord grants us His mercy, we’ll be back again next winter. 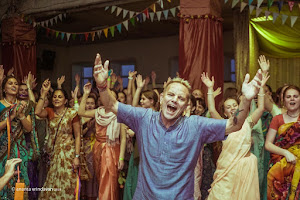 A transcendental tale of two cities: Novosibirsk and Barnaul, situated deep within Siberia, Russia. Krsna consciousness came to these two cities almost 30 years ago and has grown into two thriving communities of devotees, with temples, deity worship and samkirtan. Memories of the blissful kirtans we had with these vaisnavas shall remain forever within our hearts. Despite the austerities we underwent traveling in Siberia at the end of winter, we will gladly return!

Video of A Transcendental Tale of Two Cities

Yekaterinburg is situated within the Ural region in the middle of Russia. It was founded in 1723 and named after the Russian emperor Peter the Great’s wife, Katerina. It is one of the most important economic centers in Russia with a population of 1.5 million people. Devotees in Yekaterinburg have a temple, a cow protection program, 2 restaurants and a small gurukula. They all cooperate nicely in gradually developing Krsna consciousness in their area. It was an honor and a privilege to spend 3 days with them. 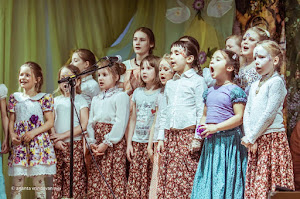 Yesterday our traveling retinue arrived in Vladikavkaz, in warm Southern Russia, a far cry from the frozen lands of Siberia. We are only 200 kilometers from the Caspian Sea which is the world’s largest inland body of water. It is bordered by Russia and Azerbaijan on the west, Kazakhstan and Turkmenistan on the north and east, and Iran on the south. Srila Prabhupada once said in a room conversation that the Caspian Sea was the place where Kasyapa Muni had his asrama. He added, “From Kasyapa the ‘Caspian’ has come. Just like formerly the capital of Afghanistan was known as ‘Gandhar.’ Now it has become Kandahar.”

We will be holding programs here for 3 days. May Kasyapa Muni bless our efforts to spread the holy names of Krsna to the people of this land! 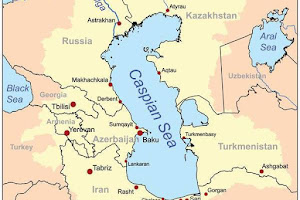 Coming out of Siberia and into the Ural’s region of Russia, we visited the city of Ekaterinburg, where Krsna consciousness has been thriving since the early 1990’s. In many ways it was like coming home, for all the members of our traveling entourage have been in Ekaterinburg numerous times and we know the yatra well. Seeing how many programs in the yatra have grown over the years, we remembered Srila Prabhupada’s statement that, “Krsna consciousness is blissful when it’s expanding.”

Abhisekha of our traveling deity of Lord Nrsimhadeva yesterday in Sochi, on the Black Sea in Russia. 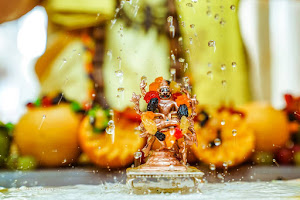 After the freezing tundra of Siberia and the cold steppes of the Ural’s we arrived in Vladikavkas in Southern Russia on a warm spring evening. Vladikavkaz is only 450 kilometers from the Caspian Sea, where Srila Prabhupada noted in a room conversation that the great sage Kapila Muni had his ashram in ancient times. We enjoyed several days of programs with devotees in the city and mingled with the local population. One highlight was a visit to a Christian monastery in the foothills of the nearby Caucasus mountains. We spoke at length with the head priest there who shared with us the history of the church in that region. He explained that the apostle, Saint Andre ( Andrew ) introduced Christianity in that area not long after Jesus Christ was crucified. He said at that time the area was inhabited by the aryan race, referring to people of Vedic culture. He mentioned there was no conflict between Saint Andre and the aryans because both believed in one God. We experienced the same harmony at our programs in Vladikavkaz which were attended by people of other faiths, including a prominent Muslim leader.

The city of Sochi, on the Black Sea in Russia, hosted the Winter Olympics several years ago. Krsna consciousness came to Sochi in the late 1980’s and today has an a large temple with an enthusiastic group of devotees whose presence adds a special charm to the city. 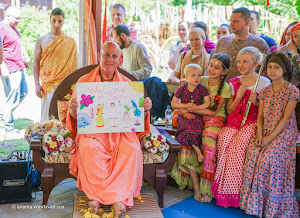