Yesterday, upon returning to Vrindavan, I visited 76 year old Gangadhar, Vrindavan’s preeminent carpenter. His carpentry shop has been serving the residents of Vrindavan for over 50 years. Now retired, Gangadhar oversees his son’s work. When I asked him what was the best piece he ever produced he smiled broadly and said, “I made wooden shoes for Srila Prabhupada in 1975!” Then he proudly showed me one of the shoes that was later given to him as a gift by one of Srila Prabhupada’s secretaries. He looked at it fondly and said, “This is my most valuable possession.” 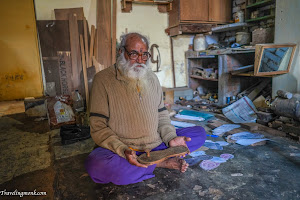