Dear Ananta Vrindavan: A very happy birthday to you today! You are rendering a most valuable service to our movement by capturing for posterity many of the significant moments in the modern day pastimes of Lord Sri Caitanya Mahaprabhu. You are appreciated by thousands of devotees around the world for your expert and artistic photos and videos. We are all so fortunate to have you onboard! You and I have been everywhere together! Looking forward to many more adventures with you. Your’s always, Indradyumna Swami 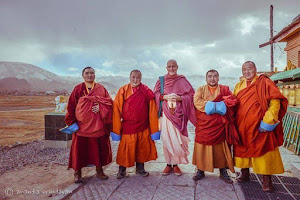 “There does not exist a ruby in every mountain nor a pearl on the head of every elephant; Nor are there sandalwood trees to be found in every forest nor will you meet a Sadhu in every birth.” [Canakya Pandit] 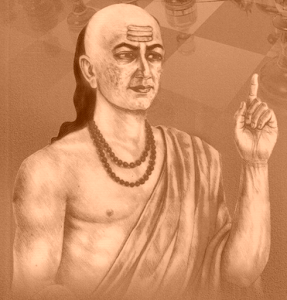 Our 29th annual Festival of India is in full swing here on the beaches of the warm Baltic Sea coast in Poland. 250 devotees from numerous countries around the world have assembled for 2 months of harinam and festivals introducing people to our Krsna conscious movement. If the weeks and months ahead are anything like the first few days of our programs, we’re in for some real nectar. 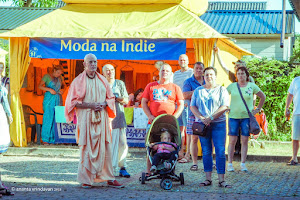 Dear disciples: A new class entitled, “In Search of Humility” is now available on www.narottam.com. Instructions on how to develop humility in our service to the Lord and His devotees. 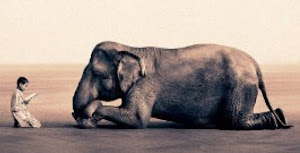 Dear disciples: A new class: “With Devotion Only” is up now on www.narottam.com.

“Even if touched by mistake, a spark still burns. In the same way, when the holy name of Lord Hari touches one’s lips it burns all sins.” 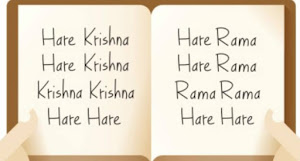 This summer marks the 29th year of our Festival of India along the Baltic Sea coast in Poland. Many people who attend have grown up with this event and even plan their summer vacations around it. We are full to capacity at each and every festival as people are eager to see and understand the wonderful world of Krsna consciousness. The professionalism of our shows, combined with the spiritual message, is all attractive.

This is Kasia. She first came to our festival with her parents when she was 11 years old. As a child she was fascinated by everything. She even won a sari in the dance competition. She still has it 😋. She returned this evening, 20 years later, with her own daughter. “I wanted her to have the same wonderful experience I had at your festival when I was young,” she said. “And most important I wanted to buy the book I remember you spoke on during my first visit years ago.” She is standing here next to me with that book: Srila Prabhupada’s Bhagavad Gita As It Is. Just one of the many miracles these festivals are producing. All glories to Sri Krsna Samkirtan! 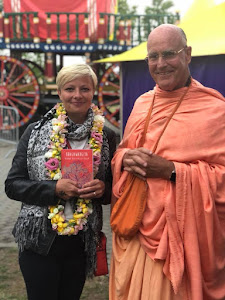 Today I received some divine mercy. Recently two of my disciples, Sri Thakur dasa and his wife, Syama-dulali dasi, visited the historic 500 year old house of Sarvabhauma Bhattacarya while in Jagannatha Puri. During their visit they begged the pujari to show them some of the personal effects of Savrabhauma Bhattacarya which are kept in a locked room in the house. They include one of his personal pens that he used for writing, as well as several scriptures he studied. While showing my disciples one of the old parchment scriptures that Sarvabhauma Bhattacarya used while ‘preaching’ to Lord Caitanya [ who stayed in his home for sometime ] a tiny piece of the sastra fell to the ground. My disciples picked it up and gave it to me today as a special gift. They had laminated it. I was elated, for I often quote verses from Sarvabauma Bhattacarya’s, Susloka-Satakam in my lectures. Now I have another transcendental item to worship on my alter! Thank you Krsna for arranging this!

“From the time that the name of Hari became manifest on the earth, Vaisnava folk became seen everywhere, adorned with faultless tiloka and neckbeads and equipped with the maha-mantra. In the midst of the age of Kali, they purified the atmosphere chanting Hari Hari! So indeed it came to pass.” 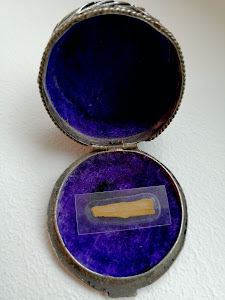 My dear disciples: Please all of you listen to the newest class on “Mommy, I Want Krsna!” on narottam.com. Valuable instructions on sharing our good fortune with the public. 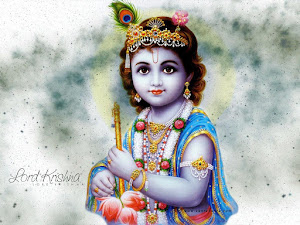 Today we went to Berlin for an interview for a visa. On the way out we walked through a rather bad part of town. Stopping at a health food store to pick up some supplies along the way we met Mr. Prokop, the owner of the store. When we first walked in he was shocked to see us.

“A few years ago I met some Hare Krsna devotees,” he said. “I expressed some interest in the teachings and they gave me a rosary of 108 beads and taught me how to chant the Hare Krsna mantra on them. From time to time I chant on the beads. This morning as I was chanting I was thinking how nice it would be to meet the Hare Krsna’s again after all these years. And just now you walk in! This couldn’t be by chance!”

“No, it’s certainly not by chance,” I said with a smile. “Krsna heard your chanting and fulfilled your desire.” 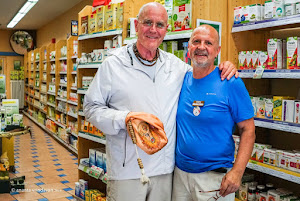 Dear disciples: “Make The Leap Of Faith” a lecture given on our summer tour here in Poland, is now available on narottam.com. Valuable insights on how to progress on the path of pure devotion to the Lord. 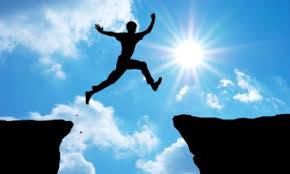 A detailed look into the activities and philosophy behind Viva Kultura’s stage show which is the very center of our festival program. Meet the actors and witness both their practice sessions and live performances on stage. The professional nature of the show, along with the devotion of the actors, combine together to enthral audiences night after night this summer along the Baltic Sea coast in Poland. Under Indradyumna Swami’s guidance the powerful spiritual message of India is slowly but surely penetrating the hearts of the people of this country.

Video of Behind The Scenes

This is a family that has been visiting our festival in Poland every summer for 12 years. They plan their vacation around our event. After our program this evening they decided to go deeper into Krsna consciousness and bought 10 books; one copy each of Srila Prabhupada’s large size Bhagavad Gita and one copy each of a smaller version of the Gita. They also purchased 4 other books on the science of self realization. “We have plenty of time to read them now on our vacation,” the gentleman said as they left. Srila Prabhupada must be so pleased! 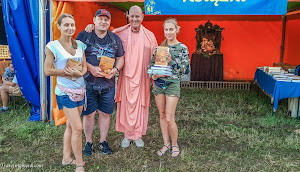 Srila Prabhupada’s request that his books be distributed is one of the main themes of our summer festival tour here in Poland. Each day on harinam as we advertise our event several book distributors follow behind us selling Srila Prabhupada’s literatures. During my 45 minute talk from the stage at the festival I encourage people to purchase Bhagavad Gita and offer to sign the books with a dedication afterwards. As soon as I get down from the stage there is always a line of people waiting with books. I can’t think of anything that satisfies me more than giving that talk each day and signing books afterwards, for I know that by doing so my spiritual master, Srila Prabhupada, is pleased. 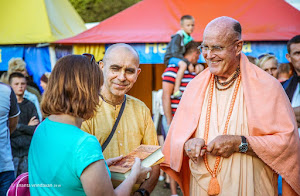 Dear disciples: A new lecture, “Please Place Me In The Ocean of Joy” is now available on www.narottam.com. Reflections on going back Home, back to Godhead. 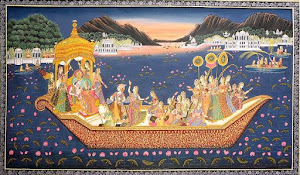 Halfway through the summer our daily festivals are going strong. The harinams, the stage shows, the exhibits and the prasadam all combine together to give people a taste of the spiritual world. Big time preaching! 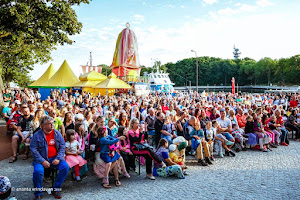 Dear Srila Prabhupada, every evening at our summer festivals here in Poland we encourage our guests to purchase your books. When they do we write a few words in the books encouraging them to study the sublime knowledge you have so kindly given us. All glories to you!

Dear disciples: A new class given on our summer tour: “My Devotee Never Perishes” is now available on: www.narottam.com. 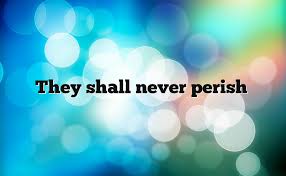 Yesterday during our performance of the Ramayana at our festival in Poland a number of people could be seen crying. Observing this my heart became completely satisfied. I saw their tears as the perfection of all our efforts to bring people into contact with Krsna consciousness through the performing arts. I remembered a similar experience Srila Prabhupada had when he played the part of Advaita Acarya in a theatrical production when he was in college:

“For more than a year, Abhay and the others rehearsed the Caitanya play, until finally their director allowed them to stage a public performance. Abhay, playing the part of Advaita Acarya, noticed that many people in the audience were crying. At first he could not understand why, but then he realized that because the players had been well trained and because they were sincere, the audience was moved.”

Srila Prabhupada, we are eager to take our festival everywhere throughout the 14 worlds for your pleasure! 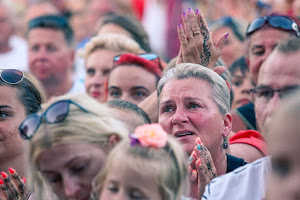 Polish Woodstock 2018 [ Now Pol’and’Rock ] is still one week away. But our boys are already on the field setting up ‘Krsna’s Village of Peace.’ Over 1 million people are expected at the event. We plan to distribute over 150,000 full plates of prasadam [ 40 tons of foodstuffs ] and have Ratha Yatra 4 days in a row through the masses of people. Srila Prabhupada, please shower your mercy upon us that we may successfully achieve our goals to please you! We live only to serve you. 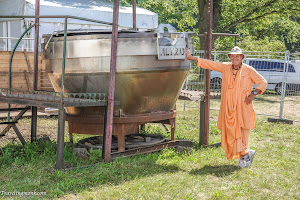 Harinam samkirtan – chanting the holy names of Krsna in public – is a trademark of the Hare Krsna Movement. It was introduced 500 years ago by Lord Caitanya Mahaprabhu, the Yuga Avatar. When done in an attractive manner with nicely dressed devotees who are dancing along with festoons, banners, balloons and various musical interments it melts the hearts of the public who become curious to know more. This original method of spreading Krsna conscious must by all means continue as the movement grows and expands thru the millennia.

Video of Take It To The People

With Polish Woodstock [ Pol’and’Rock ] just days away the countdown has begun. People are beginning to trickle in and set up their tents at this free event. As our men continued setting up our “village” I took the opportunity to walk around and meet some of the people who had arrived early. 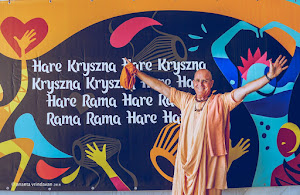