Five hundred years ago Lord Caitanya Mahaprabhu spent considerable time at Varanasi staying in the house of Tapan Misra. While there he delivered Prakasananta Saraswati and his followers. He also regularly visited the deity of Bindu Madhava and bathed daily in the sacred Ganges. 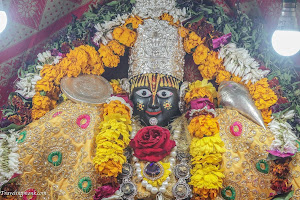 My seva at the Kumbha Mela in Prayag is to meet prominent sadhus and spiritual leaders. Yesterday with the help of Pundrik Goswami from the Radha Raman temple in Vrindavan I met with Rajendra Das Ji Maharaja a well known sadhu also from Vrindavan. We discussed ISKCON’s growth around the world. He was amazed to hear that Srila Prabhupada went to Russia in the 1970’s and how there are now many thousands of devotees there as a result. When I told him that a google search reveals that Prabhupada’s books now appear in 10 of Russia’s official languages and that eleven million copies of Bhagavad Gita have been distributed he just shook his head in amazement. 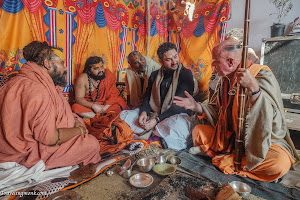 Swami Avdheshanand is the leader of one million renunciates called Naga Babas. The Naga Babas are given the privilege of being the first to bath in the Ganges at Kumbha Mela. But before they bath, their guru Swami Avdheshanand bathes. When we met yesterday he said, “Oh yes, I know you. We have met several times before. Your movement is spreading all over the world, creating a genuine spiritual revolution. It is most wonderful what your Prabhupada has done!” It is deeply satisfying to hear so many spiritual leaders speak highly of our spiritual master’s achievements. 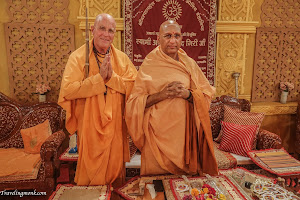 Continuing with my meeting of sadhus at Kumbha Mela, myself and Pundrik Goswami spent several hours with Swami Chidananda of Parmarth Niketan from Rsikesh this morning. Upon hearing the glories of Srila Prabhupada and Vrindavan he spontaneously offered his help in renovating several holy places in the dhama. It was an amazing offer and we will be keeping in close touch. Myself and Swami warmly embraced as we parted! 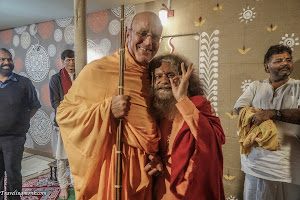 Yesterday we went to take bath at the sangam. The confluence of three rivers in Prayag Raj is known as the Triveni Sangam. Tri means “three” and veni refers to a braid. Sangam means “union.” The dark blue and black Yamuna flows swiftly into the white and gray Ganges. The sacred river Sarasvati flows underground.

Bathing in any of these sacred rivers is purifying but the purification is said to increase a hundred times where the rivers meet. The Varaha Purana states: “In Prayag there is the Triveni. By bathing there one goes to heaven and by dying there one gets liberation. It is the king of all tirthas [holy places of pilgrimage] and is dear to Lord Vishnu.”

To get to the sangam one must navigate through a tangled assortment of boats all heading back and forth to the sacred bathing area. 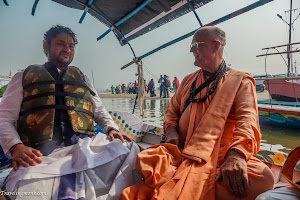 Yesterday evening we met with Sri Ravi Shankar, founder of The Art Of Living Foundation with centers in 156 countries. We spoke to him of ISKCON’s success in spreading Krsna consciousness in the United States and mentioned, in particular, our annual Sadhu Sanga Retreat which takes place in his large retreat center in Boone, North Carolina each spring. He was very impressed that over 2,000 devotees come together for 3 days of kirtan and katha during the event. In appreciation, he kindly gave me a gift of a beautiful silk chaddar. So nice to be sharing our movement’s accomplishments around the world with the spiritual leaders of India. It is all the mercy of Srila Prabhupada.

Today the High Court Judge of Prayagraj came to Kumbha Mela. I met him along with Pundrik Goswami. Goswami spent much of the time telling him how our movement is spreading in Russia and China. The High Court judge was very impressed. Goswami concluded by telling him about Krsna’s Village of Peace at the Polish Woodstock. He went so far as to invite him for this summer’s Woodstock Festival on August 2 and 3. Who knows? Perhaps he’ll come. Lord Caitanya’s samkirtan movement is full of so many wonderful surprises. 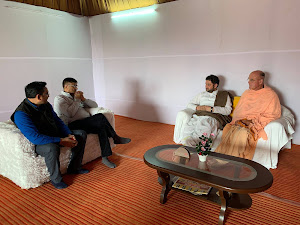 As America’s Super Bowl plays out and the UK debates Brexit we are on our way at this very moment with 64 million people to bathe in the Ganges at the Triveni Sangam on Mauni Amavasya Shahi Snan, the most auspicious day of Kumbha Mela 2019. May the whole world be blessed by this great yajna. 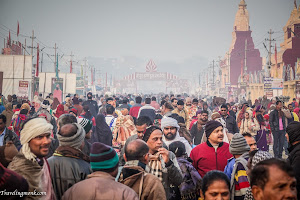 The following photos are an attempt to capture the mood of Kumbha Mela in Prayagraj 2019. With an estimated total of 120 million people in attendance over 7 weeks it’s only a drop in the ocean of the story of one of the largest religious gatherings ever on the planet. 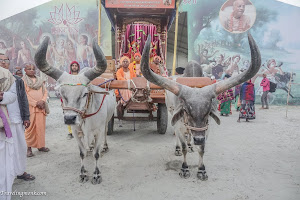 February 12, 2019: Advaita Acarya’s Salagram Sila
During Kartika, in Santipur, at the house of Advaita Acarya, I received unimaginable mercy. The pujari kindly placed the sacred salagram-sila that Advaita Acarya had worshipped 500 years ago, while appealing to the Lord to appear, on my head. 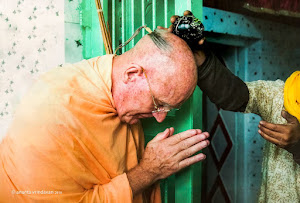 “The next incarnation is Varaha, who appeared in the form of a boar or hog. He delivered this earthly planet by His tusks, and kept the whole world on His tusks. We can only just imagine how big He appeared! The world at that time appeared just like the moon disc decorated with some marks. He says, “My dear Lord, You have appeared as the great boar. So let me offer my respectful obeisances unto You.” 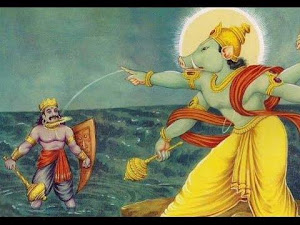 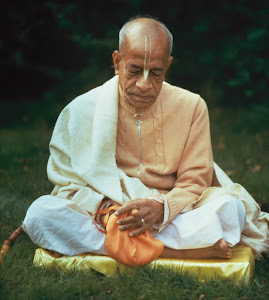 The Perfection of Chanting Hare Krsna

“The purification of one’s chanting hari-nama means as soon as you chant the holy name of Krsna you will see the form of Krsna, realize the qualities of Krsna, remember the pastimes of Krsna. That is pure chanting of Hare Krsna mantra. That is stated in the commentary of Srila Jiva Goswami: that a pure devotee who chants Hare Krsna mantra immediately realizes the nama, rupa, guna, lila – everything about Krsna, simply by chanting the names. You will feel the form of Krsna. You will remember all His qualities. ‘Oh, Krsna is so qualified – He is so magnanimous.’ Then you will remember His lila pastimes: ‘Oh, Krsna instructed Arjuna. Krsna played with His cowherd boys. Krsna had very nice talks with the gopis, with His mother, Yasoda.’ These things you will remember. That is the actual perfection of chanting.” 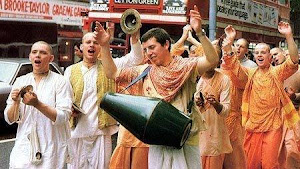 This Is The Proof

Srila Prabhupada then changed the subject. “How do we know Krishna is God?” he asked us.

“Because Krishna says so in the Bhagavad-gita,” a devotee said.

“Anyone can say that,” Prabhupada countered.

I piped up, “You told us so, and you’re a representative of Krishna, a spiritual master . . .”

“Someone will say I am just an old man.”

Not knowing what else to say, we were silent.

After a few moments, Prabhupada said, “You know Krishna is God because you feel His presence when you chant, as well as when you serve. You feel the ecstasy—this is the proof.” 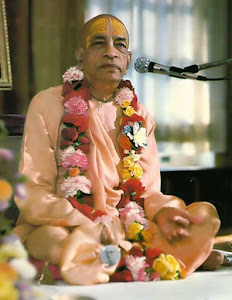 I very much appreciated this post today by Giriraj Swami!

“Today is the appearance day of Srila Prabhupada’s spiritual master, Srila Bhaktisiddhanta Sarasvati Thakura. He was very kind, but also very strict. He said of himself, ‘I am not only a proofreader of the press; I am a proofreader of men—-I see their faults and try to correct them. I am also a proofreader of religion. I have appeared in the zodiac sign of the crab, so
whenever I see anything undevotional, I act like a crab. If I see any so-called devotion, not actually in the true unalloyed spirit, I shall pierce it!’

May he kindly correct me as he sees fit.

Yours in service,
Giriraj Swami” 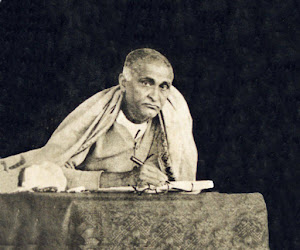 “The Supreme Personality of Godhead is so kind to the conditioned souls that if they call upon Him by speaking His holy name, even unintentionally or unwillingly, the Lord is inclined to destroy innumerable sinful reactions in their hearts. Therefore, when a devotee who has taken shelter of the Lord’s lotus feet chants the holy name of Krsna with genuine love, the Lord can never give up the heart of such a devotee. One who has thus bound the Supreme Lord within his heart with the ropes of love is to be known as bhagavata-pradhana, the most exalted devotee of the Lord.” 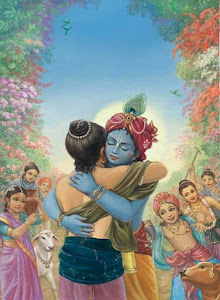