Our last program in China was with a large group of devotees and guests outside of Beijing. Everyone listened with attention and appreciation as we discussed the glories of the holy names. We finished with a rousing kirtan. I leave tomorrow and I will greatly miss these sweet souls. There is still a lot of pioneer work to be done in China. I shall return. 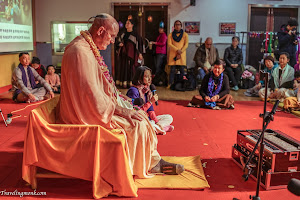 As I was leaving China one kind monk whom I befriended handed me this paper from the Qing Dynasty ( which reigned 300 hundred years ago ) which says “Always be a gentle soul – but have the heart of a lion.” I will carry this blessing wherever I go. 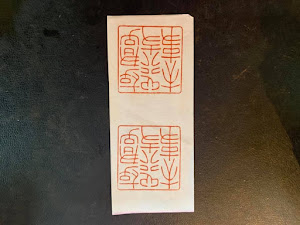 My dear godbrother Kaliyaphani prabhu: It was with great sorrow that I learned of your departure from this world yesterday. I have many fond memories of our times spent together at New Mayapur in France during the 1980’s. I was the temple president and you served in the Gurukula. We both shared a love for chanting the holy names and I can still remember the roaring kirtans we had in the temple room each and every day, as well as on the streets of local towns. Your enthusiasm for chanting the holy names was endless! And who can ever forget the famous theatrical performance of the Appearance of Lord Nrsimhadeva that we both participated in for an audience of several hundred devotees from around the European zone? Along with many devotees from New Mayapura we practiced for months. Surely everyone present vividly remembers the final scene of that drama when you as Hiranyakasipu – and me as Lord Nrsimhadeva – fought the final battle for almost half an hour! I still bear scars from the realistic performance we enacted! I will miss you my friend. I have no doubt you are serving our beloved spiritual master now in accordance with your heart’s desire. It will be an honor and a pleasure to serve alongside you again. Your servant, Indradyumna Swami 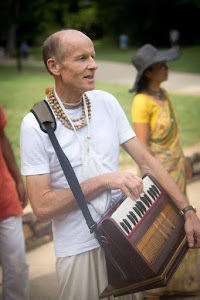 During a 3-day visit to Dubai in the UAE, we participated in several events. First of all a hall program for the local devotees. Then a public program attended by the elite of the city. A number of prominent Muslin personalities were in attendance. Finally we celebrated my good friend, BB Govinda Maharaja’s, Vyasa Puja. An amazing 72 hours! 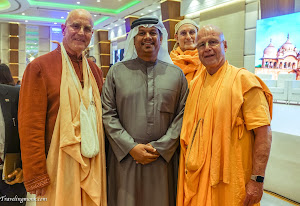 Yesterday, on my way to ISKCON’s Eco-Village, just north of Mumbai, I made a short stop at our temple near Juhu beach. I sought the blessings Sri Sri Radha Rasabehari to spend 3 months at the Eco Village, starting today, to rest and recuperate from a long period of active preaching. I also plan to spend significant time reading and chanting. My first break in many years! While taking darsan of the deities I had the good fortune of meeting Gopal Krsna Maharaja. An auspicious start to a new adventure for me! 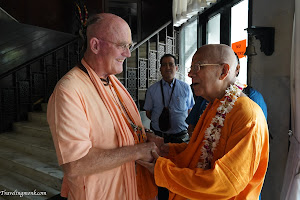 Dear disciples and friends: Tomorrow ( Wednesday ) I will be giving Srimad Bhagavatam class here at Govardhan Eco Village in India, near Mumbai. It will begin at 7:30 a.m. local time. Interestingly enough, the verses are about Sudarshan Chakra! Tomorrow the local devotees are installing a large chakra on top of their new temple of Madan Mohan. Thousands are expected in the afternoon. You can watch the class live-view on the Facebook Page entitled: Kartika Parikrama with Indradyumnna Swami 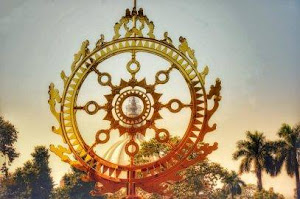 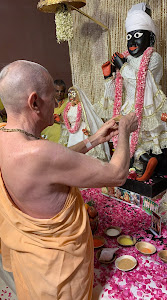 The Flower Festival at ISKCON Chowpatty was especially nice this year with the attendance of hundreds of yoga students who had just graduated from their Yoga Teacher Training courses at Govardhan Eco Village. The kirtan roared for hours as the deities and then the devotees were inundated with literally millions of flowers. 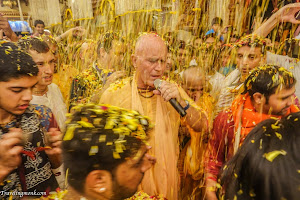 Dear disciples: The lecture, “Krishna You Are Mine” delivered at Chowpatty temple during the Flower Festival is available on www.narottam.com. 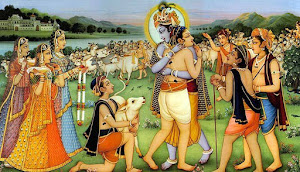 “When I was alone in New York, I was thinking, who will listen to me in this horrible sinful place? All right, I shall stay a little longer, at least I can distribute a few of my books, that is something. But Krishna was all along preparing something I could not see. Now I can see it is a miracle. Otherwise, your city of New York, one single old man, with only a few books to sell for barely gaining eatables, how he can survive, what to speak of introducing God consciousness movement for saving human kind? This is Krishna’s miracle. Now I can see it.” 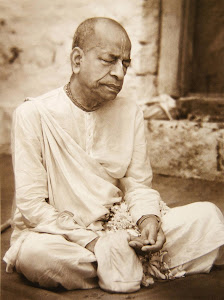 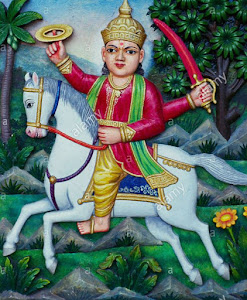 Upon arriving at the Kumbha Mela in Prayag Raj I was invited to stay in the area where most of the prominent sadhus are staying. I took it as a opportunity to network and share the mission of Srila Prabhupada with many of the recognized spiritual leaders of India. Indeed within minutes I was on stage sitting next to the Deputy Chief Minister of Uttar Pradesh. After exchanging pleasant words I shared with him some of the glories of Srila Prabhupada. As the evening wore on I was able to do the same with a number of the sadhus on stage. May Srila Prabhupada’s glories be spread throughout the 14 worlds! 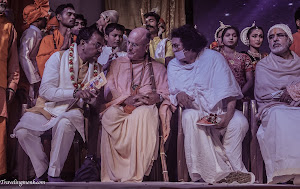