Kamyavan signifies the forest that fulfils all spiritual desires. Our parikrama party took full advantage of our visit there by chanting from our hearts, hearing with rapt attention about the pastimes that took place in the forest there and by visiting a number of sacred temples and other sites. Kamyavan is rich with the history of Vedic culture. In particular is the deity of Vrindadevi, worshipped by Srila Rupa Goswami. Her presence in Kamyavan attracts many thousands of devotees each year. We all were mesmerised by her beauty and her and transcendental aura.

This weekend our parikrama party is visiting Jaipur, in Rajasthan. Here we find beautiful Sri Sri Radha Govinda, the worshipable Deities of Srila Rupa Goswami. Each morning thouands of citizens literally run to Their mangala arotika and sing Their praises for hours. Many return to the temple in the evening as well. These Deities are literally the center of people’s lives here. And the devotion of the citizens is contagious! We look forward to our 4 days here in the “City Of Victory!” 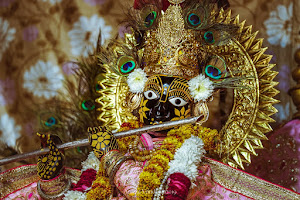 Today in Jaipur our Kartika parikrama party visited the temple of Radha Gopinath. The deity of Gopinath was carved over 5,000 years ago and remains a source of great inspiration for all Gaudiya Vaisnavas. Gopinath means, Lord of the Gopis. The temple is famous for it’s groups of women who sit for hours each day in front of the deities singing devotional songs. Our parikrama party also visited the famous Amber Fort, high on a hill on the outskirts of the city. While there we had an enthusiastic kirtan for all to see. 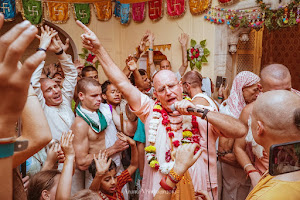 During our Kartika parikrama in Jaipur we visited Kanak Vrindavan where Radha Madhava, the original deities of Jayadeva Goswami, are worshipped. We relished hearing from Mukunda Datta prabhu about the history of Kanak Vrindavan, as well as his comments on the Gita Govinda written by Jayadeva Goswami. We also appreciated the beautiful gardens and old architecture that make Kanak Vrindavan so famous. 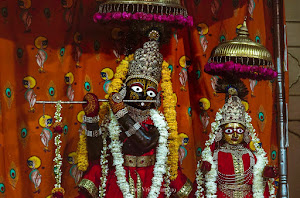 Yesterday our parikrama group visited the pastime place ( Lilasthan) of Brahma Vimohana Lila. In that pastime Lord Balarama steals all of Krsna’s cowherd boys and cows. The sacred ground was deep in the Vrindavan countryside providing a wonderful atmosphere for Krsna katha and kirtan. It was a blessed day for all 350 devotees! 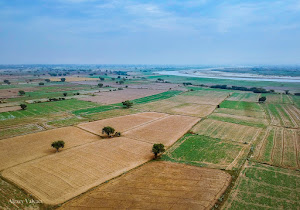 This photo album shows the extraordinary beauty of Kishori-kunda where Srimati Radharani would take Her bath each morning while living at Yavat with Her ‘husband’ Abhimanyu. Many wonderful pastimes have taken place there, including King Kamsa turning into a Vraja-gopi upon touching the sacred waterof the lake one day! There are also photos of our visit to Ter Kadamaba, where Krsna herded the cows 5,000 years ago and where Rupa Goswami wrote Upadesamrita 500 years ago. 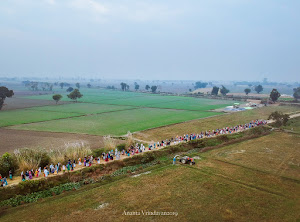 Deep In The Desert of Rajasthan

During Kartika our parikrama party visited Jaipur, deep in the desert of Rajasthan, where we took darshan of Radha Govinda, the worshipable deities of Srila Rupa Goswami. Each morning thousands of citizens run to the temple for arotika and sing praises of the deities for hours. Many return to the temple in the evening as well. Radha Govinda are literally the center of people’s lives in Jaipur. The devotion of the citizens towards the deities is contagious! We also visited the historic deities of Radha Gopinath, Radha Damodar and Radha Vinode. On our final day, we went to Amer Fort on the outskirts of the city. There we had an enthusiastic kirtan for all to see! We look forward to one day again visiting the famous, ‘City Of Victory!’

Dear disciples: Three new Kartika parikrama lectures have been posted on www.narottam.com . They are: 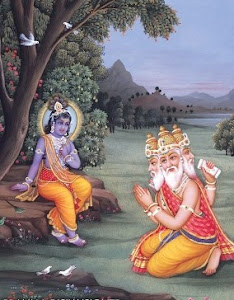 Yesterday we visited the forest of Tapovan where the young gopi girls of Vrindavan performed austerities to get Krsna as their husband. In that small, but idyllic set of woods, we heard how the girls ate simply for one month, bathed daily in the cold waters of the Yamuna river and prayed continuously to the goddess Katyayani. At the end of the month they went to Chir Ghat, some distance down the river, where Krsna fulfilled their deep spiritual desires. We relished our time at Tapovan! 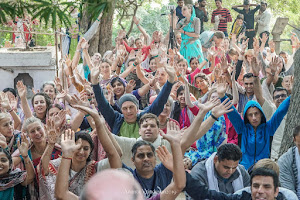 The Most Sacred Place

A few days ago our parikrtama party visited Radha Kunda, the most sacred place in the universe. We approached Srimati Radharani’s kunda with all the humility we could muster and bathed in the sacred waters. We also listened to a discourse on Radha Kunda’s glories and relished kirtan and prasadam afterwards.

During Kartika our entire parikrama party of 350 devotees did a special evening program in New Delhi at the home of our friend Venu Madhava das. It was like a small version of our Festival of India program in Poland! Many of Venu Madhava’s friends, business associates and influential personalities from New Delhi were present. All the guests and devotees enjoyed the program very much and by the next morning our parikrama party was back in Vrindavan walking in soft dust on route to another one of the many sacred sites of that holy abode. [ This video was produced by Venu Madhava’s business group ] 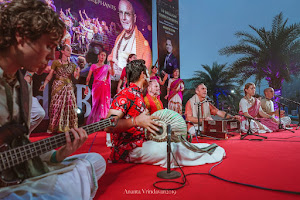 The International Yoga Festival is taking place again in Rishikesh this coming March with 10,000 spiritual seekers from the West expected. We have a desire to introduce the blissful world of Krsna consciousness to all of them. It’s an ambitious project!

The annual International Yoga Festival is taking place in Rishikesh this coming March with many thousands of spiritual seekers from the West expected. Myself and 50 devotees would like to share with them the blissful world of Krsna consciousness through the medium of daily harinam samkirtan and ecstatic evening programs at a beautiful asrama we will be renting. We’ll speak of the wisdom of Bhagavad Gita, have hours of kirtan and a sumptuous feast every evening for 21 days. It’s an ambitious project! Please visit the following website to help us: www.sacredseva.com

“Sadhu On A Bench” from our Vrindavan parikrama this morning at 5 a.m. 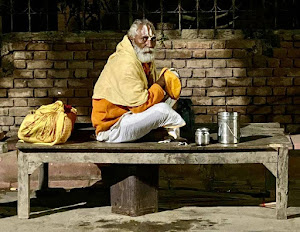 Visit to Phalein And Prahlada Kunda

During our recent Kartika parikrama in Sri Vrindavan Dhama our group visited a very interesting village – Bhaya Gaon – where there is lake called Prahlada Kunda. The local villagers hold a festival in honor of Prahlada Maharaja there each year, appreciating his love and devotion for the Lord. During the festival, they burn an effigy of Holika, who was Hiranyakasipu’s sister. She was involved in trying to kill the saintly Prahlada, but because of that offense, she perished. The villagers were most ecstatic to have our large contingent of 350 devotees present in their town where we did harinam samkirtan, distributed prasadam and held a long discourse.

I would like to thank all the persons who kindly donated up to this point for our ambitious Kirtan Fest In Rsikesh this coming March. Many thousands of spiritual seekers from all over the world will be coming to Rsikesh to learn about India’s spiritual culture. We want to be in the forefront sharing with them traditional kirtan, the immortal wisdom of Bhagavad Gita and nutritious and tasty prasadam. I humbly request more sponsors to step forward to help us share these wonders of India with the world. Please visit www.sacredseva.com 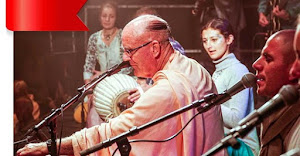 Dear disciples: My godbrother, Cyavana Swami is very ill and about to leave this world. Please keep him in your prayers as he makes the transition to his next service for Srila Prabhupada. He was one of the original pioneers in spreading Krsna consciousness around the world, especially in Africa. No doubt, Srila Prabhupada is waiting for him with open arms. The following is Cyavana Swami’s personal recollection of meeting Srila Prabhupada in Boston Harbor way back in 1965. A historic moment for him and the world:

“I was stationed aboard a Coast Guard Cutter at Boston Harbor on September 17th 1965 when Srila Prabhupada’s Jaladutta ship was moved from anchorage over to Constitution Wharf. My ship was docked at the base nearby. I was on duty on the quarterdeck.

“It is a Maritime custom that when two ships pass they offer a ‘salute’ by lowering, then raising again, the Ensign or Flag at the stern of the ship. I offered the American Flag to Srila Prabhupada’s Jaladutta ship in this tradition and when I looked up I was looking directly at him and he was looking directly at me. I was transfixed by his effulgence and stood frozen in time as his ship passed. He acknowledged the greeting by slightly raising his left hand, palm outward. I will never forget that moment. Now 52 years later the wake of his ship will continue to flood the world with love for Krishna.

“At the time I had no idea who he was other than a holy man from India. Constitution Wharf is located at the mouth of the Mystic River and the Coast Guard Base is only a few hundred yards across from it. Six years later I was initiated, also in Boston. The night before the ceremony Prabhupada called me up to his room and asked me to read two verses from Bhagavad Gita. He commented briefly then ordered me to go to Africa to open centers and preach to the people there.

“I have always hoped that my greeting with the flag made him feel happy and welcome after his long and arduous journey across the Atlantic ocean.” 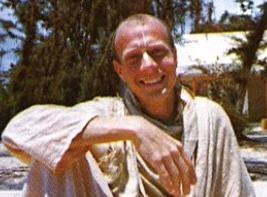 A few days ago we visited Kharala, the village of Champakalata, one of Srimati Radharani’s 8 special girlfriends. Full of cows, buffalo’s, peacocks and other animals, it very much resembled the Vrindavan many of us first came to in the early 1970’s. We all relished hearing of Champakalata’s unique transcendental qualities and her service to Vrindavan’s queen. Afterwards we visited the samadhi of Vrajranabh, the great grandson of Krsna, who installed a number of Deities of Krsna around Vrindavan, soon after the Lord’s departure for Goloka, 5,000 years ago.